BBC: The air that makes you fat

BBC: The air that makes you fat

Take a deep breath, and exhale. Depending on where you live, that life-giving lungful of air might just be pushing you towards diabetes and obesity.

The idea that “thin air” can make you fat sounds ludicrous, yet some extremely puzzling studies appear to be showing that it’s possible. Two people can eat the same foods, and do the same exercise, but over the course of a few years, one may put on more weight and develop a faulty metabolism – thanks to the atmosphere around their home.

Traffic fumes and cigarette smoke are the chief concerns, with their tiny, irritating particles that trigger widespread inflammation and disrupt the body’s ability to burn energy. While the short-term effects are minimal, over a lifetime it could be enough to contribute to serious disease – besides the respiratory illnesses more commonly associated with smog. “We are starting to understand that the uptake and circulation of air pollution in the body can affect more than just the lungs,” says Hong Chen, a researcher at Public Health Ontario and the Institute of Clinical Evaluative Sciences in Canada.

How strong is the evidence from these studies, and should you be concerned?

Laboratory mice offered some of the earliest concrete clues that the effects of air pollution may penetrate far beyond the lungs. Their breeder at the Ohio State University, Qinghua Sun, had been interested in studying why city-dwellers seem to be at a particularly high risk of heart disease compared to country folk. Lifestyle, of course, could be one reason: in most major cities a fast food chain is rarely more than a block away, for instance, which might encourage unhealthy eating. Nevertheless, he wondered if another answer may be hanging, invisibly, in the air we breathe.

To find out more, he started to raise laboratory mice in the kinds of conditions you might find across various cities. Some breathed filtered, clean, air, while others were funnelled the kinds of fumes you might find next to a motorway or busy city centre. Along the way, his team weighed the mice and performed various tests to study how their metabolism was functioning.

After just 10 weeks, the effects were already visible. The mice exposed to the air pollution showed greater volumes of body fat, both around the belly and around the internal organs; at the microscopic level, the fat cells themselves were around 20% larger in the mice inhaling a fine mist of pollutants. What’s more, they seemed to have become less sensitive to insulin, the hormone that signals to cells to convert blood sugar into energy: the first step towards diabetes. 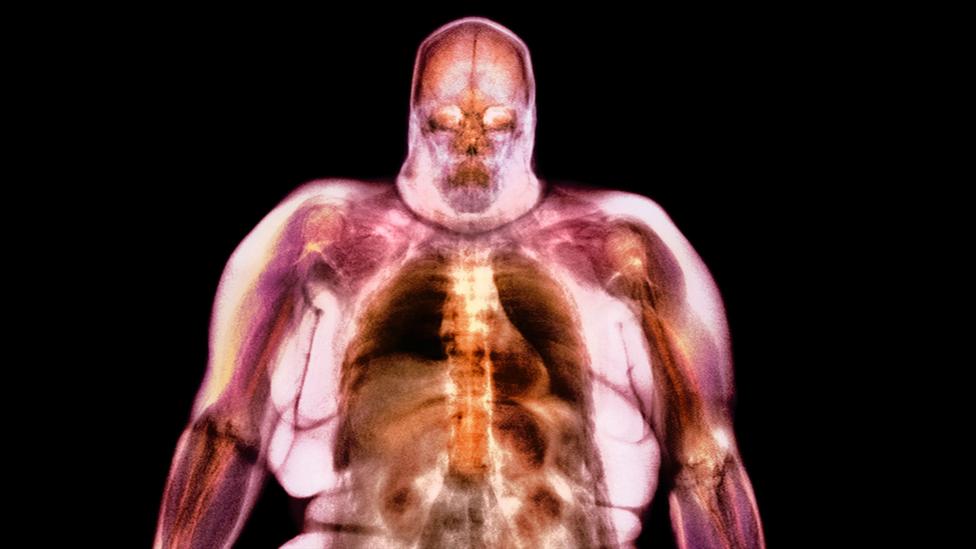 Tiny particles irritating the lungs may set off a cascade of reactions throughout the body, disrupting the hormones that control appetite (Credit: Science Photo Library)

he exact mechanism is still debated, but subsequent animal experiments suggest the air pollution triggers a cascade of reactions in the body. Small particles, less than 2.5 micrometres wide, are thought to be primarily to blame – the same minuscule motes of pollutant that give city air its gauzy haze. When we breathe in, the pollutants irritate the tiny, moist air sacs that normally allow the oxygen to pass into the blood stream. As a result, the lungs’ lining mounts a stress response, sending our nervous system into overdrive. This includes the release of hormones that reduce insulin’s potency and draws blood away from the insulin-sensitive muscle tissue, preventing the body from tightly controlling its blood sugar levels.

The tiny irritating particles may also unleash a flood of inflammatory molecules called “cytokines” to wash through the blood, a response that also triggers immune cells to invade otherwise healthy tissue. Not only does that too interfere with the tissue’s ability to respond to insulin; the subsequent inflammation may also interfere with the hormones and the brain processing that govern our appetite, says Michael Jerrett at the University of California, Berkeley.

All of which knocks the body’s energy balance off-kilter, leading to a constellation of metabolic disorders, including diabetes and obesity, and cardiovascular problems such as hypertension. 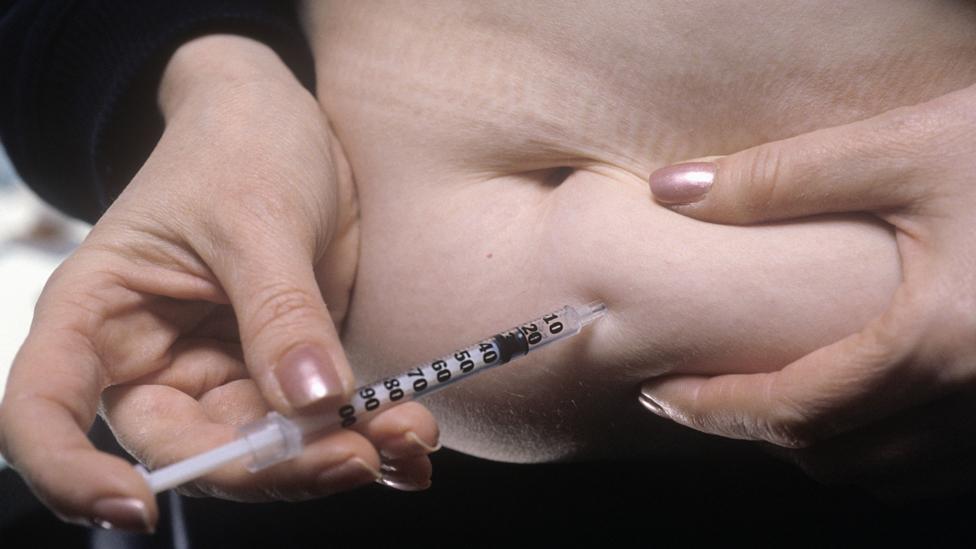 By disrupting insulin sensitivity, air pollution may contribute to diabetes and other serious (and life-shortening) cardiometabolic disorders (Credit: Getty Images)

Large studies from cities across the world suggest that humans might be suffering the same consequences. Chen, for instance, examined the medical records of 62,000 people in Ontario, Canada over a 14-year period. He found that the risk of developing diabetes rose by about 11% for every 10 micrograms of fine particles in a cubic metre of air – a troubling statistic, considering that the pollution in some Asian cities can reach at least 500 micrograms per cubic metre of air. Across the Atlantic, a Swiss study saw a similar signs of increased insulin resistance, hypertension, and waist-circumference in a sample of nearly 4,000 people living among dense pollution.

The scientists have been particularly concerned about the effects on young children, with some concern that a mother's exposure to these pollutants may alter the baby's metabolism so they are more prone to obesity. Consider the work of Andrew Rundle at Columbia University, who studied children growing up in the Bronx. During pregnancy, the children’s mothers had worn a small backpack that measured the air quality as they went about their daily business, and over the next seven years the children’s health was monitored at regular intervals. Controlling for other factors (such as wealth and diet), the children born in the most polluted areas were 2.3 times more likely to be considered obese, compared to those living in cleaner neighbourhoods.

Jerrett, meanwhile, has found that the risk can come from inside as well as outside the home: parental smoking, he showed, also led to faster weight gain among Californian children and teens. “It interacts synergistically with the effect of the air pollution,” he says – in other words, the combined risk was far greater than the sum of individual risks. 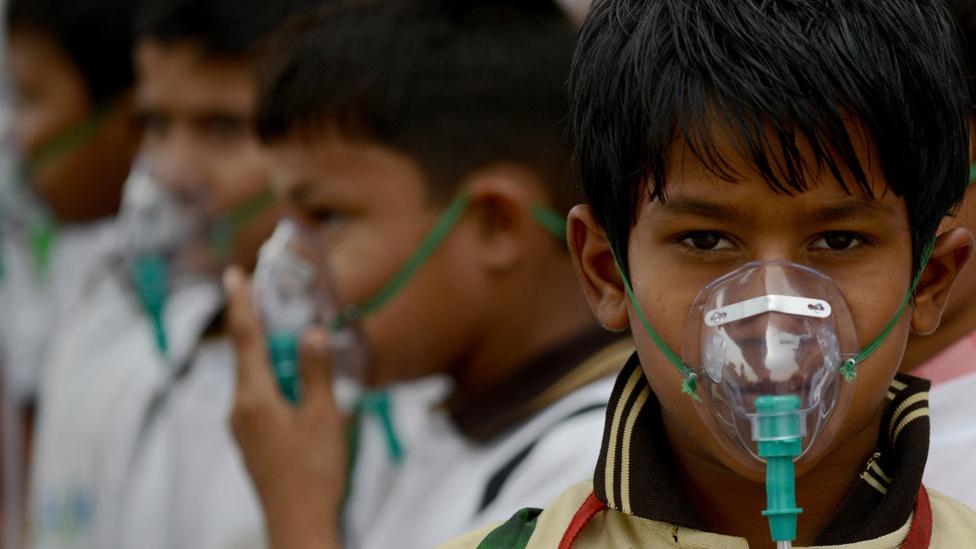 Living in a highly polluted city doubled the chance that a child would grow up obese, according to one study (Credit: Getty Images)

Despite these troubling findings, we should be cautious about reading too much into them. “They only draw a link between exposure and outcome, but can’t prove that one factor causes another,” says Abby Fleisch at Harvard Medical School. Even so, her own findings would seem to agree with the general trend – she has shown that even in the first six months, babies of mothers living in polluted areas appear to put on weight more rapidly than those in cleaner areas – but she stresses that we still can’t be sure we haven’t neglected some other factor, besides pollution, that could explain the apparent link.

Fortunately, a few teams are already searching for the missing pieces to fill those gaps in our knowledge with more detailed studies. Robert Brook at the University of Michigan and colleagues in China, for instance, recently tested a small group of subjects in Beijing over a two-year period. They found that whenever the city’s infamous smog descended, giveaway signs of developing problems like insulin resistance and hypertension peaked – providing more concrete evidence that the air quality was indeed driving changes to the metabolism. 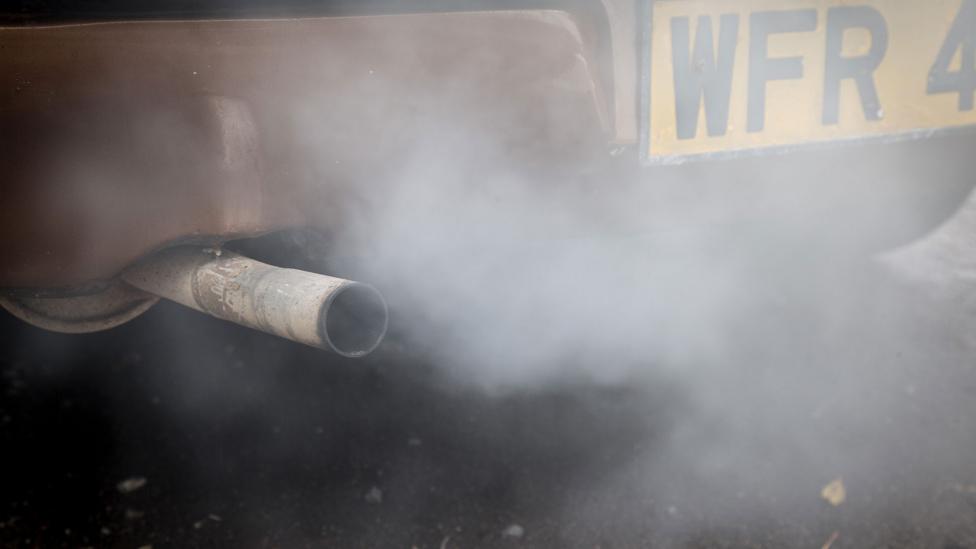 Cleaning up these exhaust fumes could save millions of people from a lifetime of illness (Credit: Getty Images)

If the link is proven, how concerned should we be? The scientists stress that the individual, short-term risk to any one person is relatively small, and certainly shouldn’t be used as an excuse for obesity by itself, without considering other aspects of your lifestyle. But given the sheer number of people living in cities with high pollution, over the long term the total number of casualties could be enormous. “Everyone is affected by pollution to some degree,” says Brook. “It’s continuous, involuntary exposure, across billions of people – so the overall impact becomes much greater.”

The solutions are familiar, if difficult to implement: restrict traffic pollution by promoting electric and hybrid vehicles, for instance. Jerrett suggests streets could also be redesigned to reduce the exposure to pedestrians and cyclists. In the short term, he points out that air purifiers could be added to more homes, schools and offices to filter out some of the harmful particles.

Brook agrees that action needs to be taken internationally, both in the developing world and in cities like Paris and London that superficially, might seem to have their pollution under control. “In North America and Europe the pollution levels have been trending in right direction – but we shouldn’t rest on our laurels,” he says. “From the standpoint of improving health across the world, it should be one of our top 10 worries.”

David Robson is BBC Future’s feature writer. He is @d_a_robson on twitter.